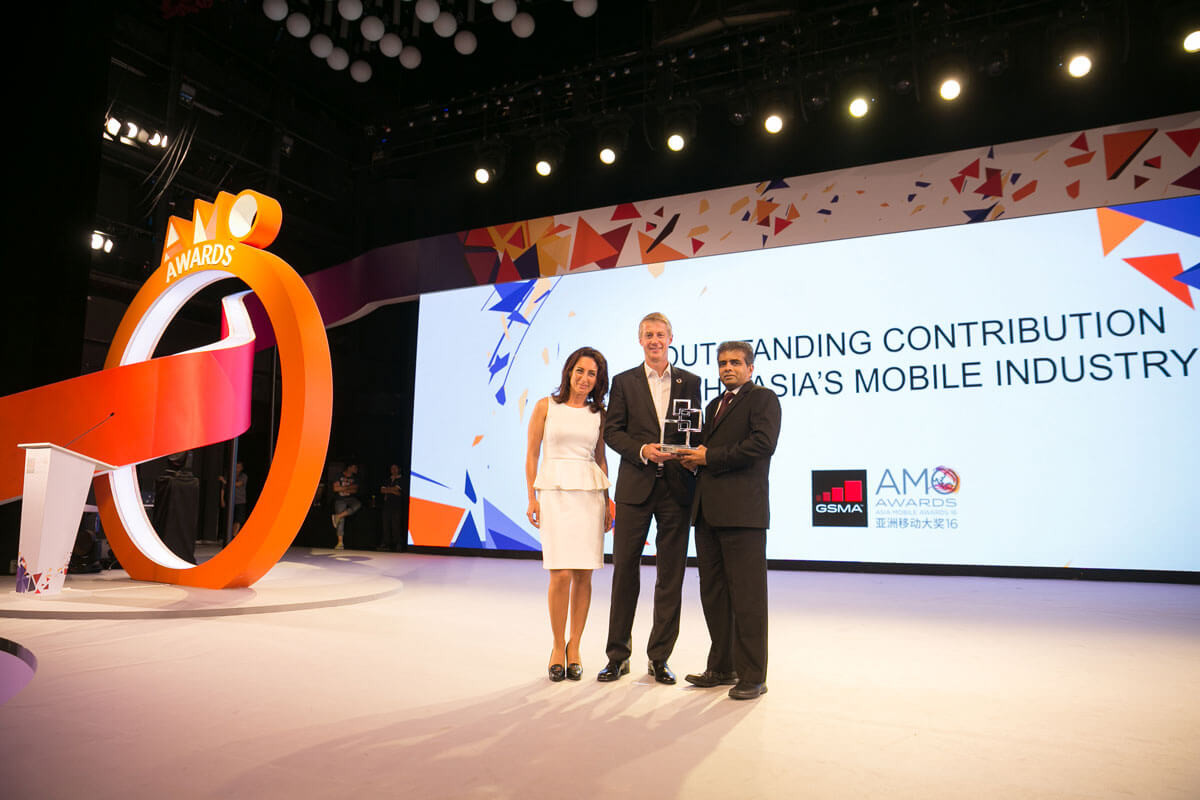 Dhaka, July 10, 2016: Axiata Group Berhad (Axiata) has recently announced that GSMA, the association governing the Global Mobile Industry, has named Dr Hans Wijayasuriya, the Group’s Regional CEO for South Asia and the Group CEO of Dialog Axiata PLC in Sri Lanka, as the first recipient of the ‘Outstanding Contribution to Asian Mobile Industry’ Award for 2016.

The award recognises sustained and extraordinary contributions by individuals, organisations or collaborative achievements that advance the value and benefits of mobile communications for people, business and societies in Asia.

At the Asia Mobile Awards held in Shanghai this week, Mats Granryd, Director General of the GSMA said, “This year’s recipient is honoured for his extraordinary personal leadership, as well as his company’s unwavering support for the collaborative ideals of the GSMA over the last two decades. This award recognises a 22-year career in the industry, including 19 years as leader of a dynamic mobile network that remains on the cutting edge of innovation. This CEO has earned enormous respect among his peers in the region as Chair of the GSMA’s Asia Pacific Interest Group in its formative years of GSM technology. He has also led his company to win 6 Global Mobile Awards, competing with the best in the industry. Under his leadership, his company has propelled Sri Lanka’s mobile infrastructure to a position of regional leadership and a level of advancement on par with the developed world. This CEO has, through a consistent commitment of purpose, brought together the power of GSM technology, Sri Lankan talent and the prowess of a regional telco group, Axiata, to deliver an indelible contribution to country and region.”

President and Group CEO of Axiata, Tan Sri Jamaludin Ibrahim said, “Dr Wijayasuriya is most deserving of this award. His contribution to the Axiata Group and the industry in general has been immense. In this increasingly digitalised world, his vision and leadership has put not only Sri Lanka but our other operating countries ahead of the curve in technology adoption and talent development. Innovations coming out from Dialog has been recognised as some of the best by the industry. We are very proud of achievements and look forward to his further contribution.”

Dr Wijayasuriya dedicated the award and accompanying international recognition to the Dialog Team, the company’s over 10.5 million Sri Lankan customers and key institutional stakeholders. “The Dialog Team has proven that Sri Lankan talent is second to none across the globe and together with our valued customers and partners, are principal contributors toward this recognition. Equally, we are indebted to the Government of Sri Lanka for the progressive policy environment espoused with respect to ICT advancement, and to Axiata for its consistent and committed investment in Sri Lanka’s ICT infrastructure over the past two decades. The contribution of many such stakeholders have in sum made it possible for Dialog to reach a position of leadership on the region’s telecommunications landscape,” he said soon after receiving the award.

With its broader goal of Advancing Asia, Axiata is a committed long term investor in all its markets. The Group’s contribution to the national development of the countries it operates in has gained industry and international recognition. In 2015, Tan Sri Jamaludin Ibrahim, was the recipient of the prestigious GSMA Chairman’s Award which recognised his outstanding personal contribution to the growth and development of mobile communications around the world.

ABOUT AXIATA
As one of the largest Asian telecommunication companies, Axiata today operates in ten countries, servicing approximately 290 million subscribers. With a diverse portfolio in mobile network operations, communications infrastructure services and digital services, the Group pieces together the best in connectivity, technology and people in its vision of Advancing Asia.

Axiata has controlling stakes in market leading mobile operators in South East Asia and South Asia. Axiata Group of companies operate under the brand name of ‘Celcom’ in Malaysia, ‘XL’ in Indonesia, ‘Dialog’ in Sri Lanka, ‘Robi’ in Bangladesh, ‘Smart’ in Cambodia and 'Ncell' in Nepal. Further to this, the Group also holds strategic interests in ‘Idea’ in India and ‘M1’ in Singapore.

‘edotco’, the Group’s infrastructure company, operates in six countries to deliver telecommunications infrastructure services, amassing a portfolio of over 16,000 towers and 12,000 km of fibre. It aims to be one of the top regional tower companies and is committed to responsible and sustainable business operations.

As a committed and long-term investor, Axiata provides employment to 25,000 people within its operations. In line with its sustainability goals, the Group actively supports and drives young talent development; disaster response and recovery; as well as green initiatives.

ABOUT Robi:
Robi Axiata Limited is a joint venture between Axiata Group Berhad, of Malaysia and NTT DOCOMO INC., of Japan. Robi is one of the leading mobile phone operators in Bangladesh with 27.6 million subscribers, as of April 2016. Robi network provides nationwide coverage to 99% of the population with 13,475 BTS and 4,271 3.5G sites. Robi proudly claims to have widest international roaming service in the market, connecting about 385 operators across more than 140 countries. It is also the first operator to introduce GPRS and 3.5G services in Bangladesh. The Company has introduced many first of its kind digital services in the country and has invested heavily in taking mobile financial services to the underserved communities in the rural and semi-urban areas.